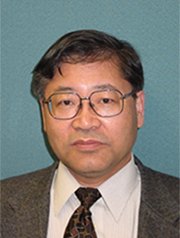 Tomoyuki Nishita is a professor in Department of Economic Information of Hiroshima Shudo University and Director of UEI Research from 2013. He was a professor in the Graduate School of Frontier Sciences (also in the Department of Information Science) at the University of Tokyo from 1998 to March 2013. While he taught at Fukuyama University from 1979 to 1998, he was a visiting researcher in the Engineering Computer Graphics Laboratory at Brigham Young University from 1988 to 1989. His research interests center in computer graphics including lighting/shading models (Radiosity), natural phenomena, real-time rendering, geometric modeling, and non-photorealistic rendering. Prof. Nishita received his BE, ME and Ph.D in 1971, 1973, and 1985, respectively, from Hiroshima University.

Prof. Nishita received Research Award on Computer Graphics from Information Processing Society of Japan in 1987, and also received Steven A. Coons award from SIGGRAPH in 2005. He has written 17 SIGGRAPH papers. He is one of the pioneers of Radiosity Method. He was a member of the Editorial board of the IEEE Transactions on Visualization and Computer Graphics. He was a president of The Institute of Image Electronics Engineers of Japan in 2009.

In the field of Computer Graphics, general research topics are geometric modeling, rendering such as hidden surface removal, shading, and animation. The research topics of our laboratory cover very wide range of these research areas, especially our advanced research topics are realistic rendering such as:
(1) Realistic image synthesis taking into count of various illumination effect (inter-reflection of lights and illumination due to various types of light sources)
(2) Photo-realistic rendering of natural phenomena such as clouds, skylight, water, atmospheric scattering due to particles.
(3) High quality and fast rendering of curved surfaces (parametric surface and metaballs) without polygonization, and shape deformation.
(4) Interactive or real-time rendering of 3D objects or natural phenomena using graphical hardware.
(5) Non-photo realistic rendering such as water painting, oil painting, pen & ink style painting.
(6) Image composition of CG images and photos.

■Research history
Our research includes lighting simulation， natural phenomena, curved surface， Non-photo realistic rendering， morphing, interactive rendering, and Web Graphics. We also interesting in CG using Java.
We have written 17 SIGGRAPH papers and 18 EUROGRAPHICS papers, some of our resulted images are printed on book cover of Proc. of SIGGRAPH, and some of our movies are screened the SIGGRAPH Electronic Theater. Our papers (or results) are cited by many books.
Collaboration with the Electric Machinery Lab. in Hiroshima Univ. (1979-1998), BYU(1988-1989), Hokkaido Univ.(1998-) and some companies.
We have written more than 250 refereed papers. 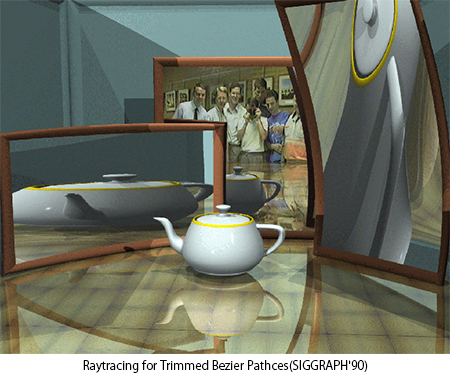 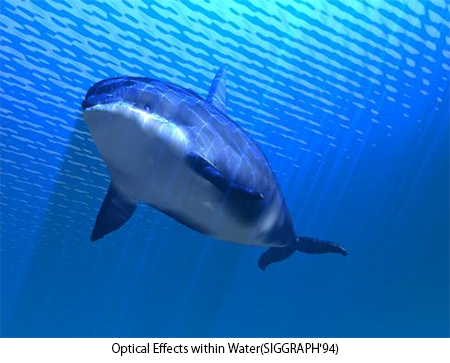 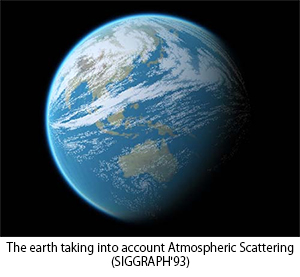 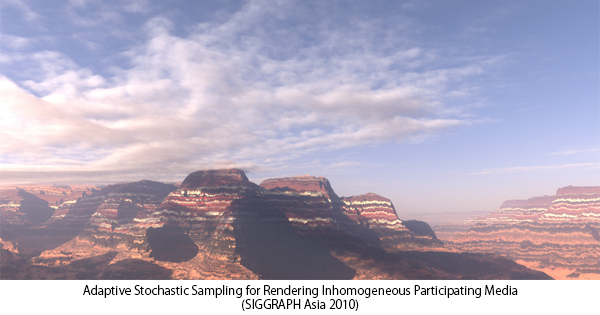