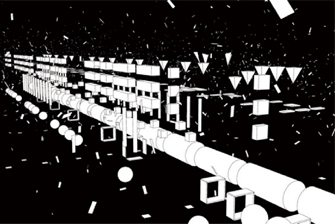 “Haisuinonasa/Dynamics of the Subway ,” the short film by School of Design instructor Keita Onishi , has been selected to screen at two international short film festivals. The film is a music video created for the song “Dynamics of the Subway” by the rock band Haisuinonasa, in which animated geometric shapes synchronize with the movement and texture of each note of each instrument, visualizing both the music and a geometric “subway.” It received the New Face Award at the 16th Japan Media Arts Festival in Japan, as well as the Best Music Video Award at the CutOut Fest 2013 , an animation festival held in Mexico.

May 23 – 19, 2014
To screen in the Animation Avantgarde competition at the Vienna Independent Shorts (VIS) Short Film Festival (Vienna, Austria).