Instructor Chihiro Shibata from the School of Computer Science won the Sequence Prediction Challenge (SPiCe), a machine learning (AI) competition organized in conjunction with the 13th International Conference in Grammatical Inference held October 5th to 7th in Delft, The Netherlands.


The completion itself accepted entries between March 17th and August 1st. A team event, it garnered 65 registered teams and 17 participating teams, with 12 that actually submitted final results.
Participating teams came from research institutions (mostly universities) from all over the world, including Japan, China, and Europe.

[Competition details]
Participants were given a training data set of symbol sequences to structure an original "model" (here, model means some kind of structure that properly represents the symbol sequences) that their machines would learn.
Then, the challenge posed a set of symbol sequence prefixes from which participants had to guess the next element in the sequence using the learned model.
A straightforward example would be guessing the following day's stock value from historical stock value data.
Data used for the competition was taken from a wide range of sources, including natural languages from various countries and access logs and communication data from networks (participants were not informed of data sources until after the competition was over). 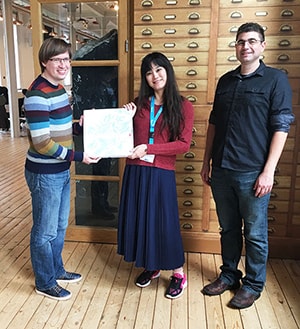